Why Eminence is Attending the Loudspeaker Sourcing Show

By admin
Posted May 28, 2015
In Uncategorized
Why Eminence is Attending the Loudspeaker Sourcing Show2015-05-282015-05-28http://www.loudspeakersourcingshow.com/wp-content/uploads/2017/08/spacer.pngThe Loudspeaker Sourcing Showhttp://www.loudspeakersourcingshow.com/wp-content/uploads/2017/08/spacer.png200px200px
0
0

We are thrilled that Eminence, one of America’s most iconic loudspeaker brands, will be exhibiting at the Loudspeaker Sourcing Show.

We caught up with owner and general manager Rob Gault after his return to the United States to ask why he felt the show was important.

Q: What advantages do you see attending The Loudspeaker Sourcing Show?

A: I was intrigued when Philip sent us information about the show. There is not a show like this that I am aware of that is strictly about loudspeaker sourcing, speaker component sourcing and finished product sourcing in China.

We know quite a few of the players over there now, but Eminence has been working with Chinese companies for nine years. It hasn’t been easy to find the right companies to work with, so I think there is a need for a show like this.

After talking to Philip, it looks like he’s getting a decent group of exhibitors together which is good.

One thing he’s doing that I like is he’s including shipping forwarders and a legal expert to help companies conduct business with the Chinese suppliers.

Even though we’ve come to know many Chinese companies, there still may be some companies that come to the show that we are not familiar with.

We’re going to exhibit but I am also interested in meeting some of the other suppliers who are there to exhibit.

Q: That makes sense. Even though you are exhibiting you may find some new companies to work with as well, correct?

A: Yes. The show is very affordable for us compared to some of the other shows we participate in. Plus the suite provides us with a good environment for conducting business.

Q: Because you created Eminence China, this show fits in well with your business strategies I would think.

A: True. Because we are over there so much, we can plan a regular trip and just show up a few days early for the show. It’s good for Eminence in many ways.

Q: When did you establish Eminence China?

Nine years ago. We had an office in Shanghai eleven years ago before we decided to open a factory in Dongguan. It’s been a challenging nine years but things are taking off for us now.

Q: What are some of the hot new products rolling out now from Eminence?

A: We are excited about our new compression drivers, the N314T (1.4″ exit) and N320T (2″). We’ve already heard from several OEM customers that these are the best sounding HF drivers on the market.

Also, the two 5″ models (Pro 5W and Pro 5MRN) are the first such products for Eminence in this size range. They are very high performing for their size and we expect them to do very well.

Lastly, the Definimax ultra-low frequency models complete one of the most versatile family of loudspeakers in the industry. Recent modifications to some of the existing models have increased their power handling to 1,200 watts. The Definimax series packs as much value as it does performance.

You can’t get more American than Eminence. With headquarters in the heart of the southland, Eminence, Kentucky, the company has a rich heritage of building some of the best speakers for guitar amplifiers in the world. 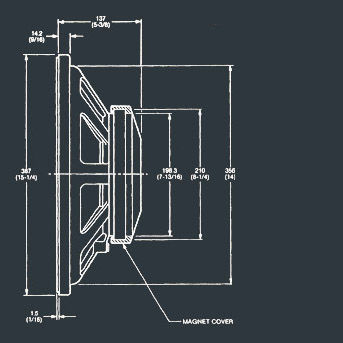